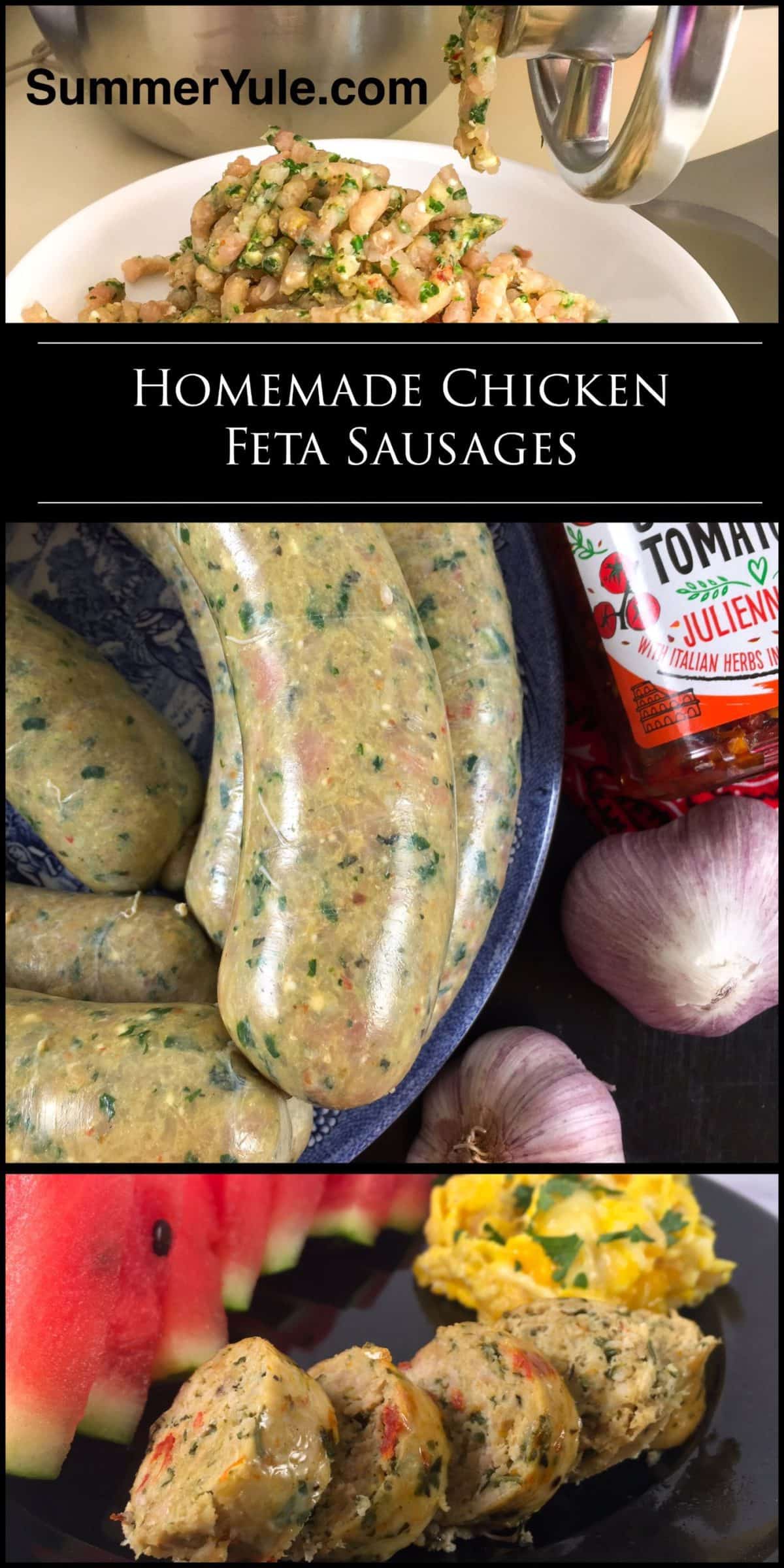 Have you ever tried making your own sausage? This fresh chicken sausage is a lighter version of classic pork sausage, and it skips the additives you may find in processed meats. I’ve taken a Mediterranean twist with this homemade sausage by adding feta, sun-dried tomatoes, spinach, and a variety of herbs. It’s a wonderful addition to Italian dishes and also works well as a breakfast sausage to serve with eggs!

In my post on how to make lard in your crockpot, I promised to post a sausage link recipe in the future. Well, the future has arrived!

I wanted to start with a chicken sausage recipe. I have an easier time finding store-bought fresh pork sausage compared to fresh chicken sausage. Cured chicken sausages are much easier to find, but they tend to have additives I’d rather reduce or avoid.

Some of the poultry sausages and bacon I can find in the United States are not that bad. I would not say they are equivalent to pork in terms of taste, but they work in a pinch. I know this isn’t the situation everywhere.

When we lived in Canada for a summer, I never found poultry bacon that could pass muster. In all honesty, there was a chicken bacon I had in Canada that was one of the worst-tasting “bacons” I have ever tried.

I think the product was called “chicken breakfast strips” on the package. Even the folks producing the product seemed to know better than to call it bacon. Haha

Some individuals want poultry substitutes because they tend to be lower in saturated fat and calories than pork. Or they avoid pork for religious reasons. If you live in an area where you can’t find poultry sausage, making your own might be the way to go.

Having a meat grinder is best for homemade sausage

First, some bad news. You really do want to have a meat grinder on hand for this recipe. A food processor will not get you the even (but not pasty) grind you need.

I’ve seen it suggested that it is possible to mince the ingredients for sausage by hand. Even though this is a slow food process, I cannot imagine the amount of work that would take!

I am using  Cabela’s Pro DC Grinder. It did a great job grinding this mixture perfectly. The recipe I am sharing for this sausage was adapted from a recipe in this grinder’s manual.

Unfortunately, the recipe they included was a bit vague for sausage-making novices such as myself. For instance, they did not specify whether to use a fine or coarse grind for the sausage.

I found that there are differences of opinion regarding the best sausage grind. I ended up choosing a coarse grind because some sources say finer grinds require more fat. This is a reasonably lean chicken sausage (the feta does provide additional fat), so a coarse grind seemed like the way to go.

Another thing that wasn’t clarified was information on the casings. You don’t have to use casings at all, of course. You could always just shape the ground mixture into patties and call it a day.

However, my meat grinder comes with a variety of sausage attachments, and I wanted to use them! Researching casings was my next step.

Reading up on the different sausage casing options was a bit interesting. I ended up ordering these natural hog casings on Amazon. They get pretty good reviews.

I was looking for the larger-sized casings, not the small ones you’d see for breakfast links. In addition to this homemade sausage, I’d also like to make chorizo and sweet Italian sausages in the future. I figured these casings could work for all of those projects.

A few of the things that drew me to this brand:

Some mildly alarming reviews discussed the bad smell of hog casings. This is probably the thing that worried me the most about ordering these. You know what part of the hog the casings come from, so there’s likely to be some validity in these complaints.

So, here’s my honest opinion. The smell upon opening the package was not that bad. After the initial soak and rinsing the inside of the casings at least three times, there was no smell at all.

If you see that the casings are not dry upon opening the package or if the smell is overpoweringly horrid, I would return them. You probably have a rancid package!

As to the positive reviews, I found they were all true. I had no tearing issues during the stuffing, and I had no issue untangling the casings.

A few more tips and tricks for homemade sausage success

The meat grinder I have comes with three different stuffing funnels. The rinsed casings looked extremely narrow, so I tried the smallest funnel first. After I turned on the grinder and air started filling the casing, I saw I needed a larger funnel.

I tried the medium-sized funnel next. Again, the casing enlarged beyond the size of the funnel once I turned the grinder on.

It really did not seem like I would be able to get the casing to fit on the largest funnel. I was beginning to wonder if I needed some sort of half-sized funnel but would have to make do.

After knotting one end of the casing, I was able to get it to fit by gathering it like I would gather pantyhose I was about to stick my toes into. Once the casing was gathered into a tidy bunch, it slipped fairly easily onto the funnel.

(P.S. I know I am dating myself with the pantyhose reference and some will have no idea what I am talking about. Haha Seriously though, just trying to slide the casing on the funnel without gathering it first was an exercise in frustration.)

By the way, this recipe makes a lot of food! Double-wrap and freeze the raw sausage you don’t use right away. If you have a vacuum sealer for food, you can use that instead.

One more thing. Since this is lean chicken sausage, you want to make sure you don’t overcook it. I’m going to tell you how I roast these in the oven so that they don’t dry out.

Enjoy! We like them for breakfast with some cheesy scrambled eggs and a big serving of fruit. 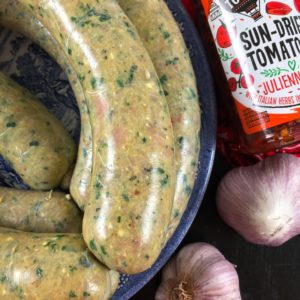 To cook your homemade sausages:

This is a level 1 recipe (may help support fat loss). This recipe yields approximately 4 pounds of sausage with an additional ½ pound of sausage leftover in the machine. That means you are getting approximately 18 4-ounce servings that are 173 calories each. This is leaner than most sausage options but keeps the filling protein (and adds veggies). If you are trying to maintain a calorie deficit for weight loss, I would consider this one a good option. Also, it’s just an excellent combination of ingredients for a sausage overall, so you are winning out taste-wise too.

Have you ever tried making homemade sausage? I used to stick to making sausage by seasoning store-bought ground meats. Using a meat grinder really opens up a whole new world of options in terms of ingredients and flavor combinations!

I hope that this post inspires you to try something new in the kitchen. Food is one topic where there is always a new recipe to try or technique to learn. It never gets boring!

I'm so glad you're here!

Learn more about me →

Sign up for email updates and get 2 free weight loss eBooks straight to your inbox.