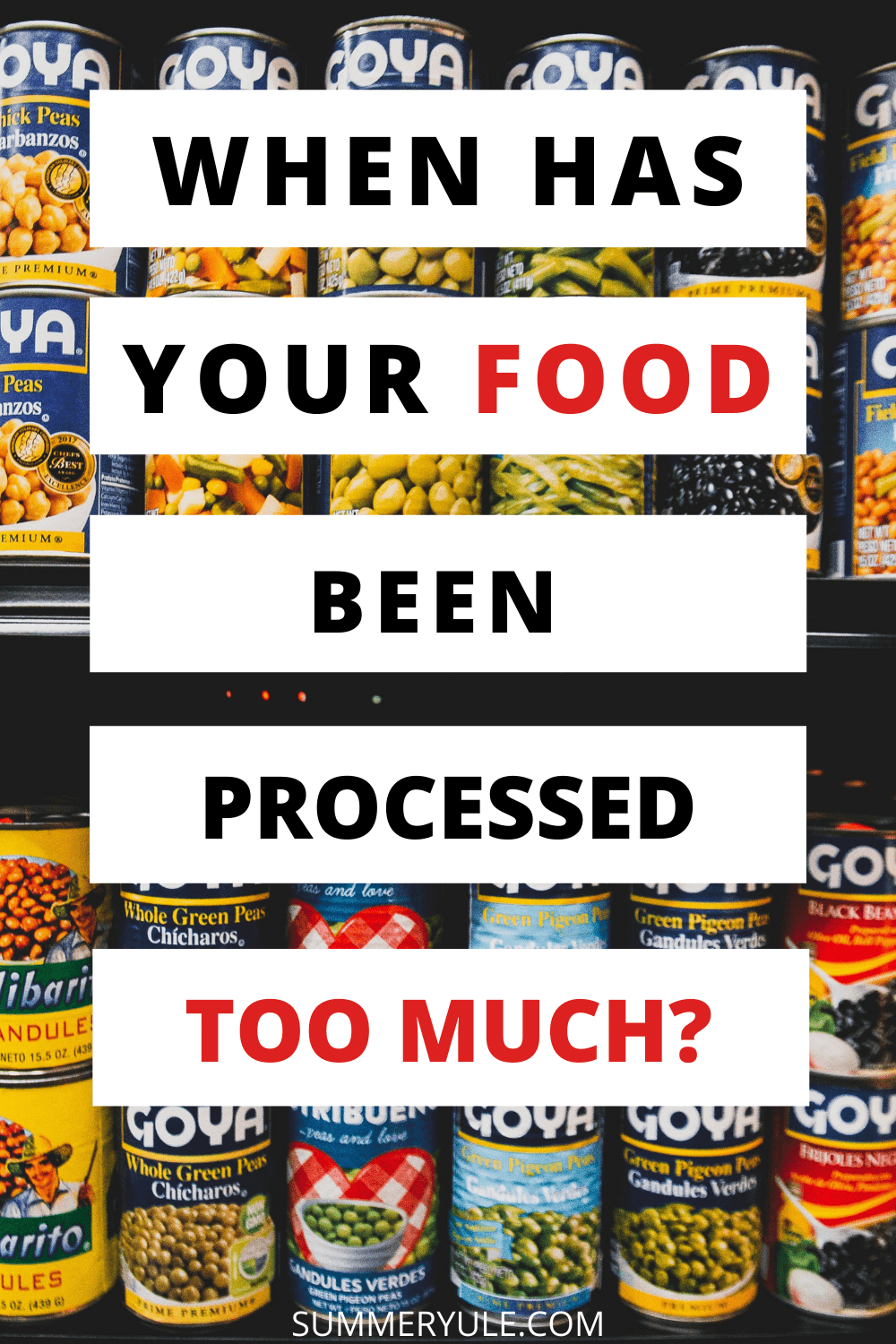 Happy Friday! Whether you are interested in weight management or just eating an overall healthier diet, today’s article is going to interest you. You may have seen the study that was all over recent media linking ultra-processed foods to increased calorie intake and weight gain. Wondering how to apply this information to your life? Keep reading!

Looking to lose or maintain a healthy weight? A recent study titled “Ultra-Processed Diets Cause Excess Calorie Intake and Weight Gain: An Inpatient Randomized Controlled Trial of Ad Libitum Food Intake” is worth discussing. In this trial, 20 participants were randomized to either an “ultra-processed” diet group or an “unprocessed” diet group. After 14 days on one diet, participants switched groups for the following 14 days. These patients lived in the facility for the duration of the trial and were provided all foods, restricting the opportunity to “cheat” on their diet or misrepresent what was eaten on retrospective questioning.

Each group was provided with the same number of calories at meals, and the diets were also matched for all macronutrients, fiber, and sugar. There were no differences found in pleasantness and familiarity of the meals, nor were there differences in appetite scores between groups. It is especially crucial that they matched for protein and fiber because (as discussed previously) these help increase satiation provided by the meal. Also, if people disliked the taste of the unprocessed meals, it seems intuitive that they would eat less and likely lose weight as a result. These factors were all accounted for, limiting the impact that they may have had on any differences in intake.

What is an “ultra-processed food”?

Wondering what these foods were that led to overeating and weight gain? The above study used the NOVA diet classification system to define unprocessed and ultra-processed foods:

Here is a summary of the NOVA system, used as the basis of Brazil’s current dietary guidelines:

While I like many aspects of this list, there is no need to include many of the ingredients in group 2 in the diet (aside from possibly salt), so I’d move it to the bottom of the list to prevent it from looking like the next best choice after group 1. Dried fruits and juices are heavily concentrated sources of calories and sugar, even without added sugar, so I would consider bumping them down into the “processed food category” both because they tend not to be beneficial for weight management and also because they are more heavily processed than the fresh fruits in the same category.

I don’t quite understand why refined grains were not put into the “processed food” category… but if they are fortified (i.e., if they have nutrients added beyond what they would naturally contain if unrefined), they are considered ultra-processed. Some sausages and burger patties contain nothing but meat and spices (check the label), so they should really be bumped up to group 1, especially taking the substantial satiating effect of protein into account. Other burgers and sausages will have fillers like soy protein isolate, starches, and added oils, and these products should remain in group 4.

I strongly dislike that infant formula was put on this list because it sends the message that a homemade milk product may be better than infant formula. There are numerous published cases of infants who have been seriously harmed due to caregivers substituting beverages for breastfeeding and/or infant formula. Even though it may be less processed, cow’s milk and homemade milk alternatives meant for adults and older children are NOT a safe substitution for breastfeeding or conventional store-bought infant formula. I wish that infant formula had been left out of this classification system. Unsweetened calcium-fortified milk alternatives would be put in group 4, but these products provide important nutrients for those who restrict dairy products. Not all ultra-processed products should be limited.

The products at Whole Foods can carry a bit of a health halo, but like other grocery stores, they sell an abundance of ultra-processed foods, and often at a much larger price tag than your conventional store. As such, I thought this would be a great location to take a mini store tour and highlight where the ultra-processed foods are hiding (always in plain sight). Before we begin, I want to say that certain folks (particularly those with certain medical conditions, a history of eating disorders, and/or those who are cachectic and need to gain weight) may benefit from not worrying about ultra-processed foods. For some people, increasing calorie intake needs to be the primary goal to benefit health. For others who are looking to lose weight or to improve the quality of the diet, the information that follows may be helpful. So let’s go…

At the Whole Foods stores in my area, you enter right into the produce area when you enter the door. They may be in containers or packages, but most of the fruits and veggies shown here have had nothing added to them and are considered a group 1 (unprocessed/minimally processed food). Great choices! The frozen fruits and vegetables are considered group 1 too, as long as you stick to the ones with nothing added. In other words, skip sweetened fruits and veggies with sauces or added oils, like the fries and tater tots. The addition of sugar and oils drags these items down into the processed and ultra-processed categories.

No surprises here, but the ice creams, mochi bites, and macarons all fall into group 4. Pretty much the entire chocolate and energy bar aisle falls into group 4 as well, no matter how organic or gluten-free they are. The chip and cereal aisles (not shown) are also considered group 4. There are exceptions, such as plain unsweetened oatmeal, which is often found in the cereal aisle. The general advice to “shop the perimeter” is not always 100% accurate, as I’ll talk a little more about below.

If there is a single piece of advice that may be useful to someone who is looking to lose weight, it out of the bakery area, where ever you tend to shop (unless it is a special occasion). I personally find the bakery at this store to be particularly tempting, because everything has that Whole Foods health halo and looks fabulous. However, every single thing shown here counts as ultra-processed food and tends to be extremely easy to overindulge in.

Grain-based desserts and yeast are the top two sources of calories in the American diet. Snacks and sides that are heavy in refined grains should not make up the majority of calories in a person’s diet. These items are not filling, so many will continue eating and eating, as their bodies try to get the nutrients that are not present in these foods. with nothing but whole grains, yeast, and salt would technically fit into group 3, but this product is much less common than you might think.

Here’s a picture of foods that are all considered group 1 (unprocessed items) and are a great choice: fresh meats and poultry, eggs, and bulk grains and legumes. If you want grains, consider skipping the bakery and getting your grains in the bulk section. Even though they are both considered group 1, I’d choose whole grains over refined to get more fiber. I’d also go primarily for grains that have not been ground into flours since flours are often used to make things like baked goods that fall into group 4. Some bulk sections also include sugar-sweetened granola and energy bites, and those would be group 4.

The hot and cold bar contains everything from fresh plain veggies (group 1) to fried items (group 4). Whole Foods tends to be great about labeling items, so you know whether you are getting a product with added sugars and/or oils or not. The meat and seafood counters are mostly unprocessed (group 1), with the exception of a few items (the salty bacon on the shelf in front would be considered group 3, and some brands would be group 4).

Last but not least, remember how I mentioned above that “shop the perimeter” is not always a great guide to finding the most healthful food options? The above refrigerator cases could be found around the perimeter of my store, and all of the “alternative” meat and cheese products shown here would be considered group 4. The fermented vegetables would be regarded as group 3 due to the addition of salt, but these (like canned veggies) can be rinsed if one needs a lower sodium product. As long as you are not on a low-sodium diet, I would not hesitate to add some delicious fermented veggies to your meals.

Now for a game. One of the following is the ingredients list for a popular brand of veggie burger (shown in the photo above), while the other is dog kibble. Can you guess which is which?

If the ingredients list bears a striking similarity to dog kibble, you might just have an ultra-processed food on your hands! (I picked on the veggie burger, but there are many other products that could have fit the bill here.) For additional information about making the most of your Whole Foods shopping experience, check out this article that I contributed to at FabFitFun, 10 Mistakes You’re Probably Making While Shopping at Whole Foods. (Quick note about the article, the FDA does not allow steroid hormones to be used in farmed fish that are to be consumed. Ornamental fish are another story.)

Have any questions about unprocessed versus ultra-processed foods? Were any of these foods that are considered ultra-processed a surprise to you? Let me know in the comments below!